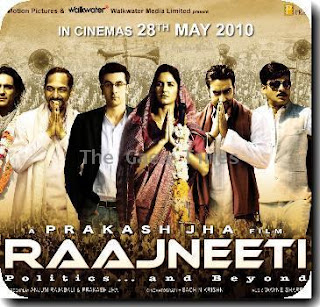 The movie so called RAAJNEETI is realsed produced by Mr. Prakash Jha a man of Bihar soil. The management of character’s & branding of Prakash jha in the movie is really worth full. Movie will go hit that’s credit goes to its marketing & campaign made by.
Had sort of stopped updating any post on movie marketing, as for past few months most of the Bollywood releases have been doing almost the same stuffs for promotion – websites, social media, television presence, reality shows participation, some general on ground events, radio messages etc. Their marketing strategies looked repetitive and formulaic. But with Raajneeti, things seem to be different. Not only the movie is in news because of its political semblances but their promotion campaign which is revolving around the integration between reel theme and real issues is also attracting enough eyeballs amongst interested common man & the media fraternity.
After Aamir Khan touring across India for the promotion of 3 idiots amongst mass, now its stars like Katrina Kaif & Ranbir Kapoor who were on a nationwide on-ground campaign to promote their upcoming movie Rajneeti. Keeping the political theme in mind, Ranbir Kapoor and Katrina Kaif have been on a run, hosting debates called “Aaj ki Raajneeti” in colleges in Bangalore, Delhi, Chandigarh, Lucknow, Kolkata, Indore and Ahmedabad. The groups discuss political and social topics concerning youth on varous channels like Aajtak, Star news etc. For instance, at IIM Bangalore the discussion was on youth taking active part in politics. As a part of this discussion cum promotion drive, the team is raising issues such as whether voting should be compulsory in the country; whether a year’s military training should be mandatory for every citizen; and whether film stars should join politics.
Posted by Kamal Kant Kaushal at 1:11 AM

Kamal Kant Kaushal
I think of myself as an intelligent, sensitive human being with the soul of a clown, which always forces me to blow it at the most important moments. I have brought myself, by long meditation, to the conviction that a human being with a settled purpose must accomplish it, and that nothing can resist a will, which will stake even existence upon its fulfillment. When I examine myself and my methods of thought, I come to the conclusion that the gift of fantasy has meant more to me than any talent for abstract, positive thinking. I am a Management graduate, extremely passionate about Marketing and want to be Marketing-Technocrat before leaving this world.